(Click here for the published article IT Travel Key West )

The home of the sunset Norah Casey returns to Key West at the southernmost tip of America, the home of the Key Lime Pie, Hemmingway and the Margarita and where the locals are as obsessed with sunsets as the Irish are with rain. Quite possibly my favourite place in the whole of the US is Key West. I think what I love about it is that is almost the polar opposite to the rest of Florida. Firstly 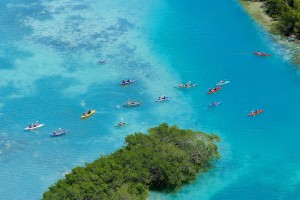 it’s a town with a heart and soul and it has streets with low rise buildings. It’s an unpretentious laid-back haven that enjoys a well-earned reputation for taking life easy. While in Ireland we seem to never tire of discussing the weather, and in particular the rain, in Key West sundown is the main topic of conversation. The first time I went there an old guy told me about this mysterious green flash that happened at the exact moment the sun went down on the horizon according to Key West folklore. He, like mostly everyone else – locals and visitors – has been chasing that green flash ever since. I looked it up and apparently it is a phenomena that can occur with just the right set of conditions. The flash is caused by the colours of the sun splitting and lasts no more than a second or two. The perfect ingredients for a green flash are a clear unobstructed view of the sunset (out on the ocean is perfect) a cloudless sky and a lot of wishful thinking. So about an hour or so before sundown, Mallory Square at the tip of the Keys and all along the seafront, a carnival atmosphere takes hold. Everyone congregates in wait for that moment when the sun goes down way out to sea – stalls peddle crafts and souvenirs, street performers take their turn to entertain and everywhere there’s music, sometimes dancing, artists paint portraits and cocktails are served from pop-ups. And then in the final moment, as the countdown to sundown begins, there is only one topic of conversation. Will the cloud clear in time to see that final moment? Is it a good sunset or was the previous night better? Is the sky as red and spectacular as it often is? Finally the sun dips below the horizon and the assembled onlookers accept with good humour that they must wait for another night for the green flash. The crowd disperses quickly to the restaurants and bars for a post mortem. The next day might be littered with little snippets of conversation about whether it was a 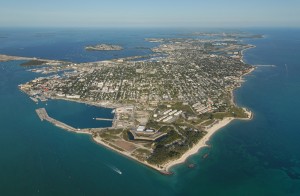 good sunset or whether the forthcoming one that evening might be better. My camera is jammed with pictures of sunsets in Key West – even the mediocre ones are spectacular. Can there be anything more pleasant that spending time in a place where the quality of the sunset is the main talking point? Key West is sort of a cross between New Orleans (as it used to be) and London’s Soho. The late night bars on Duval Street blare out live music nightly, the gay bars further up the street feature some of the best drag shows I have ever been too. Key West attracts lots of colourful characters and anything goes here. Key West is at the end of a spectacular drive along U.S. 1 (also known as Overseas Highway). There are two others way to get there – by cruise ship (they dock daily) and by plane. We took a tiny four-seater plane down from Tampa once which was a challenge for my vertigo but my fellow passengers said it was great fun with fantastic views of the coastline. But you would really miss out if you didn’t drive down the Keys – it is one of the most beautiful stretches of road with lots of reasons to stop off on the way. We were driving from Miami but the real magic starts once you leave the mainland of Florida behind and start the 113 mile spectacular road trip through the Keys especially those impossibly narrow stretches when the highway cuts through the Atlantic on one side and the Gulf on the other.