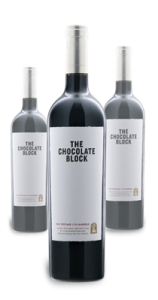 South Africa has incredible weather. Every second day during the summer you are guaranteed scorching sunshine and calm winds. Its almost built-in sun protection weather because every other day you might imagine you had been transported to a different country over night so different is the climate. We had days of ferocious winds which offered instant face lifts and chapped lips. We had storms of lightening and thunder out in the Bush. We had rain – not just ordinary rain – the sort that pours out of the sky for hours at a time and soaks everything in minutes. Then there were just ordinary cloudy days – days for driving and exploring.  This day was of the rain-drenching variety, which brought its own adventure, but it is also marked as the day we got to try The Chocolate Bloc – a wine that had become our Holy Grail. We had opted for horse riding that morning and a light rain began to fall as we headed out of the stables for an hour and half trek on the side of the mountains (between Plettenberg Bay and Knysna). Us hardy Irish folk, we told the stable owner Vicky, are well used to a bit of rain – and she, a hardy Home Counties English woman readily agreed to continue on. We were about 10 minutes into the ride when the deluge began – sheets of heavy rain fell upon us. Still we assumed it would be over in a flash and urged our, by now, unwilling steeds to stick to the trail. Above the roar of the rain I could vaguely make out Vicky shouting out some interesting facet of tree-life or pointing to a bird, but her words were whipped away by the wind and the roar of the downpour. At some point – probably about half way through our 90 minute ride – we realised that this was no ordinary shower and as the clouds emptied above us our six-year-old was whimpering softly about wanting to go home. Vicky being a hardened land-lover ploughed on through waist-high bushes of heather – our horses, their heads hanging low and saddles rain sodden sauntered after her. With the promise of hot chocolate and a hot bath on our return Dara braved the climb. We finally admitted defeat when the rivulets of rain were gathering an inch deep in our shoes and our clothing was saturated. We headed back with not a moment of respite from the rain. By the time we unsaddled we were sodden and muddy. When we arrived back to Hunters by some wonderful intuition Julie – the ever-attentive GM – had organised for hot chocolate and tea to be delivered to our room. The rain showed no let-up and we languished in hot baths and lit the fires in both rooms. Once we were warm and dry we noticed that the rain had followed us inside and was leaking through the African thatched roof. The staff went into overdrive arriving with towels and buckets – hastily preparing another room for us – two men were despatched to put a tarpaulin over the roof – it was all very exciting and a far cry from the sun worshipping of the day before. We learned afterwards that this unprecedented downpour – which lasted the whole day – had led to three deaths in nearby George and that a mini-bus had been swept away in Knysna. As if by recompense for the dreadful weather we were promised a treat for our last night – a bottle of The Chocolate Bloc for dinner. Its not that The Chocolate Bloc is expensive (at SAR 275 a bottle in a restaurant it comes in at around E32) its more that you have to find someone willing to sell it to you. The Chocolate Bloc was produced by Boekenhoutskloof vineyard near Franshoek – the wine producer is one Mark Kent – a young entrepreneur (featured on TV 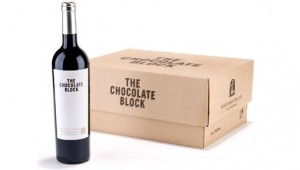 while we were there as one of the most eligible bachelors in SA!). Mark according to wine sources in South Africa is one of the most exciting wine producers – inventive and an avid risk-taker. The fact that he chooses not to take part in trophy shows sets him apart (with Springfield) as a wine producer who needs no plaudits for his work (other than the delight his growing followers have in his wines). In 2003 only 81 barrels of The Chocolate Bloc were produced – limited to 24 per customer and guarded ferociously by those who were lucky enough to have secured a batch. Once decanted and left to breath we approached our first tasting with reverence (even the staff were on standby to witness the occasion). The chocolate aromas hit the nose immediately overlaid with subtle fruits – overripe berries.  But nothing compares with the first taste.   The chocolate overtures are unmistakable – a more subtle mocha flavour than I had expected. The velvet smooth wine had remarkable flavours – prunes, marshmallows, and treacle with a spicy aftertaste (the Shiraz influence) that lingered on the palate. The blend is Grenache-based with a mix of Shiraz, cabernet, cinsaut and viognier. Like most South African reds its heavy on the alcohol at 14.5% but still less than some we tried. It was a wine to be savoured – with or without food (my preference would have been to drink the bottle there and then without the wait for dinner). This is all by way of context for our evening meal – our last (sadly) at the wonderful Hunters. Given the night it was we were looking forward to warming winter fare. The chef did not disappoint. We began with wild mushroom and truffle soup with watercress froth. The strong tastes were perfectly balanced and although I wouldn’t have thought the watercress was necessary it brought a welcome lightness to the soup. Perfect (especially as it was accompanied by the drum of rain on the windows).  The second course was a hearty dish of shredded lamb with feta and tomato piled on filo pastry sitting on a base of onion relish. Our only complaint was that the portion was on the large size (it would comfortably have made a main course) and the lamb was so tasty that we had to eat it all – leaving us a little over full for the main course! The sweet onion relish was a delightful accompaniment to the richness of the lamb and the delicate tomato and feta went surprisingly well with the dish. An unusual assortment of flavours that was somehow right for the night it was.  For the main course Richard opted for Kingclip freshly caught on the line nearby. This white delicate fish has large flakes – delicate and fragrant. The kitchen had topped it with a light gratin and served it on a bed of crisp green beans and a side of seafood ravioli. My choice was slow-cooked duck with a tangy orange sauce served with crumbly polenta-type maize, which was buttery and light. The strong gamy 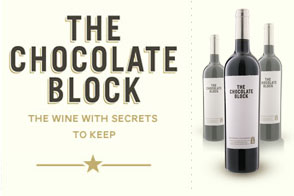 flavours of the duck were partnered beautifully by the sweet orange and being a huge fan of polenta the maize was irresistible. The main courses thankfully were better portioned – leaving just enough room for dessert. South Africa has some wonderful dessert wines and we were treated to an impromptu tasting of some eight of the best a few nights previously. The Vin De Constantia won our vote and we enjoyed a glass of the sweet nectar with our pudding. By now the incessant rain provided a comforting and familiar background noise – muffled in the comfortable confines of Hunters sitting room. The rain drenching horse ride was a million light years away as we sprawled in front of the open fire chatting to the amiable Fasie (a trainee hotel manager) a passionate wine lover with an incredible knowledge of south African wines and vineyards. Fasie, who had entertained us and educated us over the five days, joined us for a final glass (and for him his first taste) of the wonderful Chocolate Bloc – if only rainy days in Ireland brought such cheer.