Standfirst: Beat off those post-Christmas blues by planning a wonderful holiday for you and the family. Set in the south of Scilly, Club Med’s Kamarina holiday resort provides all the facilities a family vacation should have – and as Norah Casey & Richard Hannaford found out, quite a bit more. Pull Out Quote: “Each Club Med Village 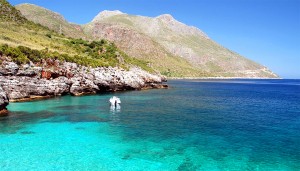 offers a whole rangeof activities – at Kamarina you can even learn the circus trapeze!” When it comes to summer holidays every family has its list of ‘must-haves’. For my wife, it must have sunshine, a stack of paperbacks, and a pool to laze beside, for Dara (our seven year old) it must have a bucket and spade, while for me, it must have organised children’s activities. With this in mind we scoured the internet and after weighing up the various options we decided to book a holiday at the Club Med resort of Kamarina.Set in the southern most tip of Scilly, Kamarina is Club Med’s biggest resort. They call it a Village and its certainly big. It has the capacity to host more than two thousand holidaymakers, in both self-catering bungalows and a large hotel. For us, one of the biggest points in Kamrina’s favour is its accessibility. You can fly direct from Dublin to Catania, and from there it’s an hour and a half coach trip down to the resort itself.Scilly is not like other parts of Italy. It is both more industrial in the towns and yet more rural in thecountryside. Kamarina is set in a secluded part of the island and is an hour drive from the nearest large town Ragusa. As we arrived we were welcomed by the G.O.’s – Club Med’s ubiquitous hosts. G.O. stands for ‘Gentil Organisateur’ and reveals Club Meds strong French influence. In fact while we were there most of the other guests were French – although at other times there are as many Germans, and Italians in the camp. As the afternoon sun began to dip we walked up a stunning tree lined avenue, past an enormous number of tennis courts, and into what looked for all the world like a picture post card Italian village, complete with flagstones and small fountains. Club Med has been around since 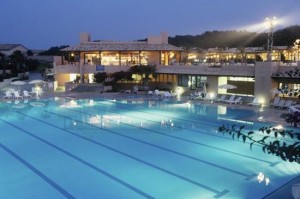 just after the second world war when a former French water polo champion and diamond expert, Gerard Blitz phoned a friend and said he was going to create a tented village on an island in the Balearics where people could come and live during the summer. There they could learn about sailing, surfing and other beach sports while eating good healthy food. There are now scores of villages all over the world, including Japan, Africa, and South America. They all offer a fully inclusive resort with activites and childrens clubs. And there are a number of ski resorts for the winter. The formula remains the same at each. A fully equipped resort where you can do whatever you like from Archery to Sailing. At Kamarina you can even learn the circus trapeze! For those unfamiliar with the Club Med philosophy, the feeling of ‘being organised’ can at first be unwelcome. However within hours the way the Village works becomes apparent and the benefits of having everything on hand are quickly appreciated.On the first morning we made

out way to the children’s area. This is divided into three – for the toddlers, for the 5-7s, and for the older children. Petit Club Med and Mini Club Med as they are called have their own staff and all the nationalities mix in together. While French is the dominant language all the staff speak a variety of languages including English.  Every day they do different things – like learning how to rock climb up a wall (with all the safety equipment), learning archery, and golf and tennis. At least twice in the week the children all perform a play for the adults. The Thursday evening show being the most popular with the huge circus tent. At least a hundred families flock to see their little loved ones perform on these nights. On our evening Dara and his new friend Stefan had to dance with two of the girls and sing a love song. And the GO’s are also deeply involved – they dance and sing their hearts out. While the beach at Kamarina is fabulous (and a great place to learn how to sail with brand new catamarans), the pool is where the wife was most at home. The swimming pool is huge, but not overwhelming. Nor are the loungers too close to each other. And for those who want to get the blood 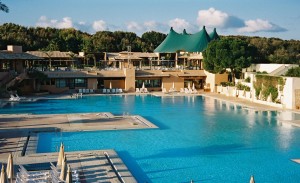 pumping just a bit, every half an hour a new activity is on offer. A non-stop exercise class takes place under a canopy on one side of the pool, while every morning a half hour water aerobics workout takes place in the pool. It’s like watching line dancing, but in bikinis! The fully inclusive fee meant we could eat and drink as much or little as we wished. There are three restaurants at Kamarina, at the main hotel,  the Volcano near the pool, and the Marina, our favourite, which specialises in seafood and which looks out over the whole beach front into the Mediterranean. At each restaurant you simply help yourself to the buffet and to the wine, which is kept in a refrigerated cabinet. While most people stayed in the Village a number of excursions were on offer for the more adventurous. Sicily is an historic island with the ancient and beautiful cities of Taormina and Syracusa. It also has Europe’s tallest and most active volcano, Mount Etna. As always with these holidays we had hardly begun to enjoy all that Kamarina had to offer when the holiday was over and we were heading back to Dublin. An informal opinion poll on the bus back found that most of our fellow travellers would return again. You can book your Club Med holidays through