( Click here for the published article IT Travel Miami )

The many shades of Miami Beach From the candy coloured art deco hotels to the coolest nightclubs on the planet South Beach Miami is a magnet for the rich, the famous and those lucky enough to delve beneath the veneer and uncover its hidden gems. Norah Casey survives three days and tells all. My late husband’s view of Miami was heavily influenced by the 1983 movie Scarface where Al Pacino plays a vicious murdering Cuban drug lord. So on our first visit together he wasn’t keen on venturing anywhere near the city and we opted for the more gentrified locale of South Beach instead – a whole world away from downtown Miami. And we both fell in love with it. At that time it was undergoing a transformation. In the 1980s South Beach became a haven for bohemian retirees where the crumbling art deco buildings commanded low rents and the beach was right on the doorstep. By the time we visited in the 1990s the area was on the turn but still magical. We stayed in small hotels all beautiful but in disrepair where you could still glimpse the faded glory of better years in the dilapidated furnishings and peeling wall paper. There was a real neighbourhood feel to South Beach then, a place for shorts and flip flops and hanging out at the beach from morning to sundown. Now it’s transformed yet again. Some areas of South Beach have worked hard to rise above the touristy over-priced strip that is now Ocean Drive creating a destination that is a luxurious urban mecca for celebrities, even if they hardly ever venture into the heartland of South Beach. From its early origins South Beach was always a world apart from the city. It was more a remote sandbar than anything else when an investor John Lum bought it all for just 35 cents an acre – he thought he could create a coconut plantation there but finally gave up in 1890. Until 1910 is was more swamp and mangroves than pristine sand. Then another investor stepped up in the early 1900s, John Collins, and he wanted to grow avocados and out of necessity he started building a canal and a bridge to connect South Beach to the mainland. He went broke before it was finished but two brothers arrived on the scene in 1912 (John and James Lummus) and they had a whole new plan for South Beach. They wanted to build a bathhouse to attract tourists and create a destination out of this small strip of sand. Other entrepreneurs were attracted to South Beach and so the bridge and canal were finished the mangroves were cleared and the bay was dredged. The first luxury hotel arrived soon after and expensive stores opened up in Lincoln Road. The yachts began to arrive as wealthy tourists came to stay and shop. Mansions and more luxury hotels in the 1920s paved the way for the art deco era of the 1930s when South Beach’s landmark pastel-coloured hotels and buildings were finished includ 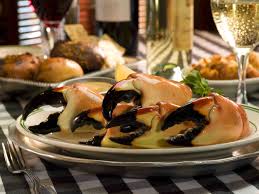 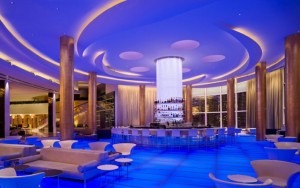 s tremendous excitement among the ultra-glam crowd no one seemed to know who was in that night…but they were fairly certain there were some big-rollers in the club. Many of our new cool friends however were nursing one drink for an inordinate length of time and didn’t appear to be in any hurry to get inside the actual doors of the club. We discovered why when the bouncer told us that the pre tickets at €300 (only available prior to midnight) were sold out at that I could still get a table for 15 on the dance floor for $50,000. And what does that get me I asked? Two bottles of vodka, two bottle of champagne, all the water and red bull we wanted but service and tax was not included! We declined the offer and as we made our way out front to try to catch a taxi every available space was taken up with Ferraris, Porches, Bentleys, Lamborghini’s – all lined up on the kerbside. Fontainebleau Hotel (www.fontainebleau.com); Hakkasan (http://hakkasan.com); 4441 Collins Ave, Miami Beach, FL 33140; telephone +1 786-276-1388 Day 3 As our final day in Miami dawned we had high hopes of being reunited with the suitcases and kept up a steady flow of calls to Delta – even though there was no human being available to talk to us. The online tracker – a great invention if it worked – was showing little action and the hotel had joined forces with us to try to locate a real live person who worked for Delta and actually knew about lost luggage. We took turns sitting in reception as we had been told that unless we personally signed for it the driver would take the luggage away. So in-between times we took a long walk of the historic art deco neighbourhood and dipped in and out of shops to pick up some souvenirs of our short stay. In the early evening we headed to the only place we hadn’t explored – the thumping, beating heart of South Beach. Much of the tourist action is on Ocean Drive (from Biscayne Street to 15th Street). It’s changed beyond belief since I last visited but you will still want to spend some time there. Ocean Drive used to be a really cool night time mecca for great cocktails and casual dining. You won’t get very far on the sidewalk before being accosted by restaurant managers waving menus and pulling out chairs for you such is the competition on the strip. And sadly there isn’t much difference between the dining options – the waitress in the place where we ended up eating told us most of the restaurants were owned by the same company. Everywhere you go on Ocean Drive tables are adorned with massive goldfish bowls filled with luminous cocktail concoctions. I hadn’t seen them before and asked the waitress what the idea was. She said some celebrity arrived in the area and was served an oversized glass of something in one of the bars and she tweeted it and so the rest of the bars and restaurants realised that they could get a social media buzz going just by serving these gigantic cocktails (she claimed that they subsidised the cocktail cost as a PR stunt but I expect they were diluted to the price point asked for!). But they are on to a good thing because myself and my friend ordered two exotically sounding cocktails and even the teenagers had mocktails and then what did we do? They looked so ridiculously large we took endless photographs at every angle and sent tweets and Facebook messages to make everyone jealous. In truth we couldn’t even finish them and the food was dreadful. But that said it was one of the best nights we had on the trip and the teenagers declared it was their favourite place…ever. The sidewalk features a constant stream of people while stretch Limos, open-topped Mustangs and Cadillacs cruise the street blaring music. We met an eclectic bunch of people that night – one guy rapped for us in the hope that we’d buy his record (which we did because he earned it), we had touts selling bags, jewellery, DVDs, at one point a group of sailors (or maybe they were only dressed up in uniform) sang a song out of tune for us. Then a troop of stiletto clad girls click clacked passed us and the sailors lost interest in the impromptu performance and left us in peace. A man with a monkey created quite a stir (and not an animal rights campaigner in sight) and there was much craning of necks to see who was about to get out of a Bentley with darkened windows – even the waiting staff were throwing 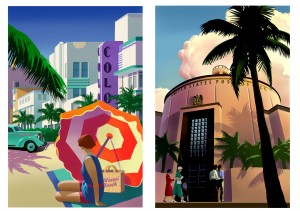 names about (apparently local celebrities but we didn’t know who they were) then eventually a child of about 12 years old got out of the back and bought an ice cream and got back in again as it slid away from the kerb. Also on Ocean Drive you will find the Pearl and Nikki Beach night spots and I was reliably informed that the best places to eat on Ocean Drive was News Café (which I ate in a million years ago when it was just a café) and Mango’s but we couldn’t get into either of them on the night and hadn’t reserved. Gianni Versace’s former ocean front mansion is also on Ocean Drive. So after our three days in Miami we woke early the next day, packed the cases (well mine had only just arrived so I didn’t need to pack) and headed south for Key West. The verdict. A fantastic exhilarating and hectic few days experiencing all the shades of South Beach – from the celebrity-obsessed party-goers at the   Fontainebleau to the street sellers and buskers on the beach front; the touristy fried fast food on Ocean Drive to the sublime Joe’s Stone Crab and the glamour of fine dining at Hakkasan. Miami Beach is not for the fainthearted or those looking for a well-earned rest. It’s high-evergy and high octane adventure and three days was just right.